If you're looking for a fun drone, one of the options you may come across is the Air Hogs Hyper Stunt Drone. Be sure to read this review before buying.

If there’s a young person in your life who is looking for a fun drone, one of the options you may come across is the Air Hogs Hyper Stunt Drone. The drone is recommended for those ages eight and up. Built with a set of protectors, users can bump and crash into objects while trying to complete stunts. Below you’ll find our review and thoughts on the product.

What Is the Air Hogs Hyper Stunt Drone and How Does It Work?

The Air Hogs Hyper Stunt Drone is a micro RC drone designed for those looking to add excitement to their drone experience. That’s because manufacturers developed the product so that it’s easy for users to perform a variety of stunts, such as barrel rolls and backflips. The drone’s remote control features a “Stunt Button” that makes it easy for users to perform tricks.

The drone also comes with gyro-stabilization, which Air Hogs says create a smooth, stable ride. Additionally, the device comes with a roller shield that will protect it when crashing into various obstructions. However, as users gain more experience flying the drone, they can remove the roller shield quickly. The device is also quite durable, which is ideal for a stunt drone.

In addition to the drone and the removable crash frame, the package comes with a USB charging cable and a user guide. The device also comes with eight spare rotors in case one accidentally broke during flight. Furthermore, users will need to provide two AAA batteries to power the remote control. These do not come with the package.

The Hyper Stunt Drone measures 9” x 2.6” x 10”. The product weighs less than an ounce, even when the roll cage is attached. You may find that the shipping weight of the product is much more substantial than this, but this is primarily because of the drone’s controller. When browsing online, it appears that the device is available in two colors, red and yellow. 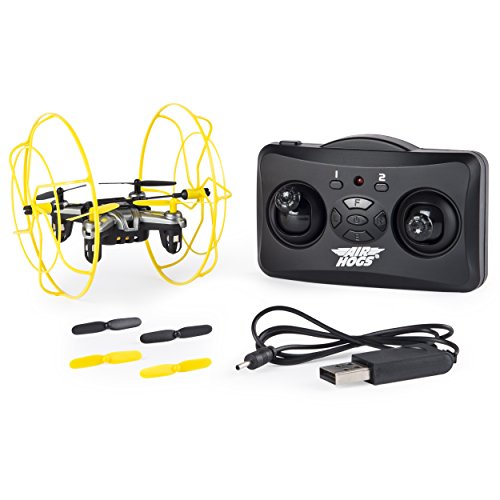 One of the things that sets the Air Hogs Hyper Stunt Drone apart is the fact that it features two modes, beginner and advanced. The two features make it easy for people of all ability levels to have an enjoyable experience when piloting the aircraft. Beginners may not be frustrated when learning to fly, and advanced pilots may not feel constricted by the design.

When the roller shield is attached to the drone, it also means that the device can travel across any surface. This is different from many other drones, which only fly. The Hyper Stunt Drone defies gravity, climbing up surfaces which may otherwise seem unimaginable. This drone can ride on the following surfaces:

The Air Hogs Hyper Stunt Drone is ideal for younger children who are gaining experience flying. Because of the product’s design and roller shield, it’s evident that the product’s manufacturers intended for users to crash the device often. Also reflective of this is the price of the drone. Unfortunately, you cannot purchase the drone from the manufacturer directly.

However, you can purchase the drone on Amazon for $19.95. Those with an Amazon Prime membership receive free shipping on the product. Amazon’s product listing also indicates that customers can request a manufacturer’s warranty from customer service and provides a link for customers to do so. However, it’s unclear what Air Hogs covers under the manufacturer’s warranty.

You can also find the product on Walmart’s website for $29.95. Walmart offers free shipping on orders over $35, so you will need to add another item to your order if you wish to receive free shipping. The primary reason you may have for ordering from Walmart is the color of the product. Amazon only offers the drone with a yellow roll cage, while Walmart provides the product with a red roll cage.

Similarly, many customers found that the device was quite prone to damage, perhaps more susceptible than it should be. For example, some customers said that the drone’s propellers broke off quickly on things that should not cause significant damage, such as dried leaves or blades of grass. Customers said the propellers broke within 24 hours of use, with some saying they broke in as little as 15 minutes.

Lastly, customers tended to complain about the fact that the drone was tiny. Many noted that the drone was smaller than others they had seen or flown and that they were disappointed by how little it was. Most did not view the size as a benefit. Meaning, it was not as though the drone could navigate through small crevices and obstacles easily. Instead, it seemed only to make the drone harder to control.

Many customers on Amazon admitted they were disappointed because they had purchased the drone as a gift for a child, but the product did not list. Many customers said that they were forced to return the product within a day of purchase. Users also complained that the device was not easy to fly, even though Air Hogs marketed it as such.

No matter if you’re looking for drones online or in store, you’re likely to come across dozens, if not hundreds, of different options. It’s easy to become overwhelmed. Fortunately, you’ve already narrowed your criteria somewhat by indicating that you’re interested in stunt drones for beginners. Below, you’ll find two options similar to the Air Hogs Hyper Stunt Drone. 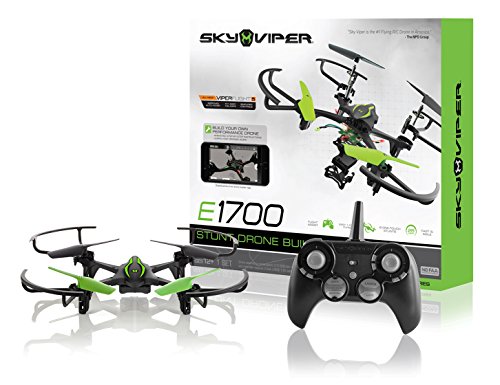 If you’re in search of an affordable stunt drone for beginners, the Sky Viper e1700 is an excellent option. The product has much better reviews than the Hyper Stunt Drone, as it has a 35-star rating on Amazon with nearly 60 customer reviews. You can purchase the product on Amazon for a little more than $20. Of those who reviewed the product, 45 percent gave it a five-star rating.

This product is unique because it allows users to construct the product themselves. If you feel that your child is too young to build the product on their own, doing so with them could prove to be an excellent bonding experience. Once assembled, you’ll have access to Sky Viper’s “Flight Sensitivity,” which allows you to choose the responsiveness of your drone based on your level of experience.

Air Viper’s “Flight Sensitivity” provides much more flexibility than the two options offered by the Air Hogs model. Furthermore, the Air Viper comes with “ViperFlight 5” which provides the ultimate control when flying. The firmware on this platform is the same found in high-end racing drones. Additionally, users can choose between auto and manual flight with Dual Flight Mode. 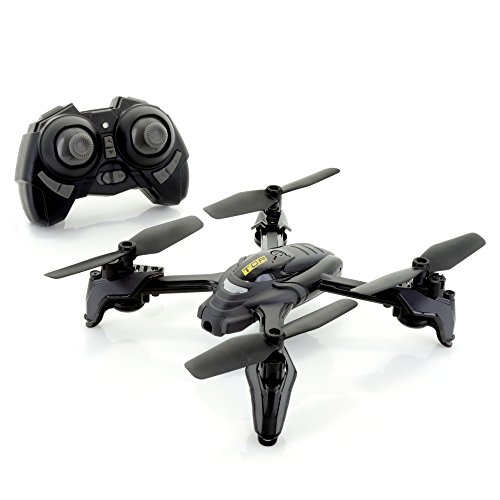 Although this model is a bit more expensive than the Air Hogs device, it comes with a unique design feature that could help spark a young person’s interest in drones. The product has a 3.8-star rating on Amazon with more than 225 customer reviews.  You can purchase the product on Amazon for a little less than $43.

This drone is an excellent choice for beginners because it comes with auto-hovering. This mode features in-flight stabilization that allows the drone to suspend in mid-air automatically even when a user lets go of the controls. The Air Hogs device does not have this feature, which could perhaps be one of the reasons it is not as durable of a product.

This product also comes with one-key stunt moves. With the touch of a button, users can perform a 360-degree flip, a vortex spin, or various other flying tricks. This is very similar to the one-touch control that users will find on the Air Hogs device. However, the Tenergy model allows users to adjust the speed of the drone so that it is easy to match the user’s experience level when flying.

Lastly, the Tenergy comes with an interactive app that is available for both iOS and Android devices. This drone comes with a camera that syncs with the app. When flying, users can view the camera footage on their phone. Furthermore, the remote control comes with an attachment that allows users to secure the phone to the controller. This makes it feel as though users are sitting in the cockpit of the drone.

When we first came across the device, we felt that it had significant potential. Based on the Air Hogs description, it appeared that this product could lead to hours of fun for users, as it was capable of climbing walls and performing backflips. However, red flags were raised immediately when we saw that the product came with eight replacement propellers.

We understood that Air Hogs designed the drone for stunts, but we couldn’t figure out why a drone needed to have eight replacement propellers. Unfortunately, we quickly found out the reason why. When testing this product, we found it to be entirely consistent with other customer reviews. Simply put, the drone did not last.

We found that whenever we hit an object, the roll cage and propellers either bent or snapped off. We practically needed to fly this device in an open field so that it did not hit anything. We also needed to do everything in our power to ensure that the machine did not crash to the ground quickly. Whenever it did, it was susceptible to damage.

We also did not notice too much of a difference between the two flight settings. Again, much like other customer reviews, we found that this device was difficult to fly. We consider our testers experienced when it comes to flying drones, and they found that it was difficult to maneuver and that the drone was not responsive to the controller.

The one redeeming quality of this drone was its price. The $20 price tag is cheap for a drone. It’s easy for customers to make the argument that the drone’s quality matches the price, and they would not be wrong. However, for those looking to dip their feet into the world of drones, a $20 option could be a reasonable way to do so.

However, there are also affordable options available online. For just a few more dollars, you can purchase a product that is of much higher quality than the Air Hogs model. Alternatives like the Sky Viper make our decision a no-brainer. We recommend that you skip the Hyper Stunt Drone and instead focus on models that will are more durable and likely to withstand damage sustained during stunts.

How to Become a Drone Pilot – Definitive Guide

3DR Iris Review: Price, Ease of Use, and More