Are you thinking of buying your kids a drone? If so, you need to find out which is the best drone for kids their age. Holidays are approaching, and your children are likely busy drafting their wish lists. If you want to see their faces light up, getting them a drone is a fantastic way of going about it. However, if the thought of letting your kids maneuver hunks of metal through the skies makes you anxious, you can hardly be blamed. Drone flying has a bit of a learning curve to it, and some models are less suitable for children than others are.

If you want to ensure your kids stay safe and have the most enjoyable time possible, it is important to get not just the best drone, but the best drone for kids, and the best one specifically for your kids.

If you are not particularly knowledgeable about drones, rest assured that you are in good hands. This article will not only answer many of the questions you probably have, but we'll also walk you through our handpicked list of contenders for the title: Best Drone for Kids. We will explain the strengths and weaknesses of each one, and by the time we are through, you should know exactly which drone (or drones) to get.

By now, you have probably heard of drones. You may have heard of them on the news, seen some of the breathtaking video footage they have captured, or seen people flying them around for fun. Drones, simply put, are unmanned aircraft that we use for a wide variety of purposes, such as business, combat, surveillance, and of course, recreation. They are flown manually via remote control or automatically via GPS-linked software.

The possible uses for drones are endless, and society has recently been learning this. Drones have become popular among militaries due to their combat potential. Governments have also begun to use them for things like monitoring traffic and weather, fighting fires, and conducting search and rescue operations.

Even more recently, drones have been making their mark in the commercial sector. Businesses all over the world are finding clever applications for this technology. In 2013, for instance, Amazon unveiled its plans to use drones to make deliveries. Soon, Amazon will deliver packages up to five pounds over distances as great as ten miles. They believe drones will allow them to make deliveries in just 30 minutes.

Today, drones are more accessible to the public than ever before. Five to ten years ago, the technology was more of a niche hobby. That is no longer the case. More and more people are beginning to enjoy the recreational potential of drones. They use them to capture beautiful photos and videos of scenic landscapes. They perform light shows with them. They even race with them. Drones are for all ages, making it important to consider which is the best drone for kids.

2. What Activities Can My Child Enjoy with a Drone?

Having a drone opens the door to many different recreational activities for your child to enjoy. Here are just a few ideas to get you started. With a drone, your child can:

3. What Safety Advice Should My Child and I Follow when Flying a Drone?

Here are some basic guidelines:

Given how popular drones have become, it is not difficult to find one. Many electronics stores carry them. You can also find a great selection on sites such as Amazon.

5. What Makes a Drone the Best Drone for Kids?

These drones range in price from $20 to $2000. The main factors in determining the price of a drone include: motor and overall build quality, battery life, and availability of extra features (such as an altitude hold mode). At the higher end of the range, you will find drones that can fly farther and longer. These drones may also come equipped with high-quality cameras.

The DJI Spark is a portable mini-drone with GPS, VPS, and GLONASS functionality. It features several flight modes, such as gesture control, tapfly, quickshot, and ActiveTrack. It also features dual-axis stabilization for the included camera, which takes HD 1080P videos at 30 frames per second as well as 12MP photos. The DJI Spark has a control range of 2 kilometers, and it can fly for around 16 minutes at a time.

You can request this information from the manufacturer's customer service department. 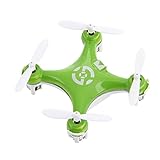 The Cheerson CX10D is a 6-axis gyro micro RC helicopter designed for simplicity with its one key landing and take-off functions. This drone features three flying modes: High, Low, and 360-degree rapid rotation. It comes with its own built-in gyroscope, which gives it extra stability, maneuverability, and control.

You can request this information from the manufacturer.

The Holy Stone GPS FPV RC Drone (HS170) is designed for drone training, making it a bidder for the best drone for kids, beginners, or anyone looking to upgrade their skills. With its headless security system, the HS170 is easy to fly for users of any level. It uses 2.4GHz technology, allowing it to avoid interference. It has a flight time of 6 to 8 minutes.

You can request it from customer service by contacting the manufacturer.

The EACHINE E10W Mini Drone is a quadcopter with WiFi and FPV functionality plus an HD camera. The EACHINE E10W also comes with a number of convenient features. These include altitude hold, headless mode, one-key takeoff, and one-key return. It even has a gravity sensor.

It comes with a 1-year warranty.

The REDPAWZ H36 is a mini-drone designed specifically for kids. It features headless mode for easy maneuvering and precise control. It also comes with a 3D roll function that is sure to delight. The H36 comes equipped with LED lights so it can be spotted in the night sky. 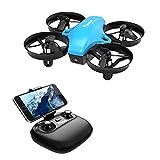 The Potensic A20W Mini Drone features complete app control and a gravity induction mode. It also features headless mode, making it the perfect choice for any beginner. It comes with an FPV camera and is fully compatible with a VR headset.

You can request warranty information directly from the product manufacturer. 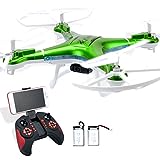 QCopter's Quadcopter Drone comes with a powerful 3.7V 1100mAh battery that delivers flight times up to 30 minutes. It even comes with a spare battery, so you never need to end your flying session prematurely. It has a control distance of 300 feet, and if that is not good enough, it also comes with a high-definition WiFi FPV camera.

The Force1 U45W features FPV and VR compatibility. It comes with an altitude hold function, a custom route mode, and one-key takeoff and landing. It is fully equipped with an HD camera as well.

You can request this information from customer service. 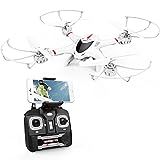 This product comes with a 1-year warranty. 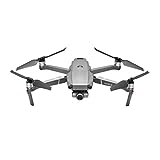 The DJI Mavic 2 Zoom Drone Quadcopter is compact and foldable, making it a highly portable option. It comes with a fantastic camera capable of taking 20MP photos and 4K 30 fps videos. It has a flight time of 31 minutes and a maximum flight distance of 18 km. At top speeds, it can fly 44 mph.

The Verdict: The Best Drone for Kids

Of the ten we checked out, the best drone for kids is the Quadcopter Drone by QCopter. It costs $90 (price rating: $$), but its functionality rivals that of a drone five times the price. It has a fantastic flight time of over 30 minutes and comes with a wide variety of beginner-friendly functions. If you want to get your child an affordable drone that has all the features of far more expensive ones, you cannot go wrong with the Quadcopter.