If you don’t know what a fixed wing drone is, we don’t blame you. Thanks to the media and the general public labeling practically every remote-controlled aircraft in existence a ‘drone’ of some kind, the long-standing hobbyists and pilots of the RC hobby have become saddled with some necessary naming conventions. Hence the term ‘fixed wing drone’ has become prevalent in hobbyist circles. The term was coined to differentiate the more classic model airplanes from the now common and ubiquitous quadcopter or ‘rotary wing’ drones that have proliferated on the market.

They are so ubiquitous in fact that many hobbyists are completely unaware that fixed wing drones are a thing, let alone that they even exist. With that said, whether you are in the market to purchase a fixed wing drone for the first time or are already an experienced hobbyist, this is the right list for you.

1. What Exactly Is a Fixed Wing Drone?

This is a very goodquestion, and knowing the answer can help you understand the difference between fixed wing drones and rotary wing drones. Generally speaking, a fixed wing drone is any remote controlled vehicle that has wings that are fixed and unmoving during flight. They fly using the same principles of lift that conventional aircraft use. It should be worth first stating that these kinds of drones have a couple of disadvantages that quadcopters don’t: Fixed wing drones generally aren’t able to take off and land vertically and also usually need either a runway or a flat open space to take off from.

However, these disadvantages are offsetby the fact that most drones of this type have larger payload capacities, greater flight time, and are generally more power-efficient than quadcopters of the same size and weight.

2. What Can You Use a Fixed Wing Drone For?

Generally speaking, many fixed wing drones are used by hobbyists for recreational purposes. Many hobbyists take it a step further and compete with other drone operators in various competitions, be it time trials or races. Others compete based on looks to see who has the most visually impressive or distinctive drone.

However, there are quite a few non-recreational uses for fixed wing drones. For example, both the U.S. military and the militaries of other countries have used drones for surveillance and offensive activities in the past, and continue to do so. Being able to observe the activities of people on the ground, both enemy and civilian, without endangering a pilot makes such drones valuable tools in the fighting forces of today.

Drones also have a wide array of uses in the commercial sector. One example is in regards to cattle ranching. Some ranchers use drones as a way to keep an eye on their livestock more easily, especially across many hundreds of acres of pasture. Another example is in the petrochemical industry, where drones are often used to both inspect existing remote infrastructure and to prospect for potential new sources of oil and gas.

Other uses of fixed wing drones include geological surveys, studying animal migrations, oceanography, and even news reporting. Suffice to say, because of the nature of drones there are as many uses for a drone as there are types.

In general, drones are freely available, although as with many things they can become very pricey very quickly depending on their size and features. Online retailers such as Amazon stock a wide variety of fixed wing drones, and some manufacturers sell directly to the consumer.

When we reviewed the products on this list, we were looking for a number of specific things, namely, build quality, range and battery life. We also checked out user reviews on Amazon and elsewhere, to get an understanding of what other users have said about each drone and to build a pros and cons list for each drone. This should help you as you make your decision about the best drone for your needs.

The Overall Price Range of the Drones on This List

Unsurprisingly, the price range of fixed wing drones, like many other things, is very wide, and depends largely on how much you’re willing to pay. On average, a basic drone will run you as little as 80-90 dollars or even less. However, the more expensive and pricier models are not only faster and more powerful but are often more feature-laden, meaning you quite literally get what you pay for.

The FPV Black X Flying WIng, despite being on the more expensive side in terms of price is worth every penny. This drone has a solid and sturdy build and hard black plastic mountings for both the prop and motor, as well as the payload. However, it is worth mentioning that the drone is not ready to fly at purchase and requires additional parts that are sold separately.

If you’re the kind of person that likes to use their own optics and cameras on a drone, then the E-fliteOpterra is your best bet. With three separate mounting stations (2 in the nose and 1 facing down in the belly) for various sorts of cameras, this drone is great for those hobbyists that like taking pictures or video. It also has a pretty decent range, meaning that you can safely fly it pretty much anywhere you need it to go.

Parrot Disco FPV – Easy to fly fixed wing drone, up to 45 minutes of...
Buy on Amazon

This drone is fast. According to its website, the Parrot Disco is one of the fastest fixed wing drones in the world, with a top speed of over 50 mph. Coming pre-assembled and ready-to-fly, this drone includes not just a controller but an FPV headset allowing you to fly the drone as if you were aboard it. And with a sleek design, it looks good flying too.

This entry on the list blurs the line between fixed wing and rotary drones; it is able to both land and take off vertically, as well as fly horizontally. It’s also both fast and very light. The kit includes a ‘fly-pad’ controller as well. However, it has a very short battery life. 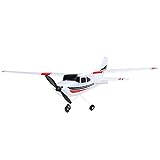 Modeled after a Cessna-182 Skylane, this entry-level RC plane handles fairly well and has a decent battery life for its price. It's also fairly small and lightweight, making it easy to carry or transport. And with a range of 200 meters, it’s a decent choice for beginners.

The Spy Hawk is a good all-around choice for an RC drone. It's made out of durable plastic and has a very solidly built construction. It comes with a plethora of safety features: a return-to-home mode, a position hold mode, and a built-in GPS stability system. The Spy Hawk also has pretty good battery life, with a solid 30 minutes of flight time as well as an incorporated forward-facing HD camera, allowing for flight with an HPV headset. All in all, this is a solid choice for both novices and the experienced.

A feature-laden offering from Xcraft, the XPlusOne is an impressive fixed wing drone. It’s a hybrid model, meaning it can take off and land vertically and fly horizontally. It can also hover in place like a conventional quadcopter, making it a solid all-around platform.

It has quite an array of features. An FPV view provided by a gimbal-mounted HD camera makes flying this drone a breeze, and the drone is also capable of operating autonomously using mission plans built with the drone’s accompanying software. There's a return-to-launch mode as well, enabling the drone to fly back to you at the press of a button or in the event of an emergency. Finally, a 20-minute battery life makes this drone a solid if expensive choice.

This entry on the list blurs the line between fixed wing and rotary drones; it is able to both land and take off vertically and fly horizontally. It’s also both fast and very light. The kit includes a ‘fly-pad’ controller as well. However, it has a very short battery life.

Modeled after the Predator drone used by the U.S. Air Force, this RC plane is both a bargain and a good option for beginners. Its body is molded from lightweight EPP materials, making it fairly durable. It also has a surprisingly long battery life of 20 minutes, provided by its LiPo battery cell. A good choice for a beginner hobbyist. 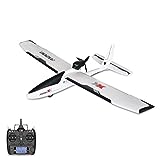 A modest offering from XK, the A1200 is a ready-to-fly lightweight fixed wing drone offering plenty of bang for your buck. It comes with a built-in FPV camera, 45-minute battery life, and includes a flight controller with attached monitor screen.

It doesn’t matter if you are a beginner or an experienced drone pilot, a quadcopter pilot looking to try something different, or a veteran hobbyist that’s done it all, fixed wing drones can offer a lot to you. If and when you plan to choose a drone to purchase, we hope this list helps you come to a satisfactory decision.

The Different Quadcopter Motors and How to Install Them

How to Build Your Own Simple Drone