With Phantom 4, DJI has offered its customers a glimpse into the future of UAVs.

In this article, we are going to analyze the exquisite DJI Phantom 4 from multiple standpoints such as engine capacity, price, performance, aerial photography capabilities, and unique features. 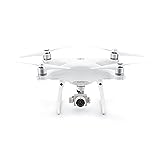 The DJI Phantom 4 is a large class drone, mainly for professional drone pilots and aerial photography enthusiasts. So, this DJI Phantom drone encompasses the latest discovery in the area of UAV technology.

DJI Phantom 4 has a 3-axis gimbal which ensures maximum stability while the drone is in the air. This proficient gimbal can help with piloting the Phantom 4 even under adverse weather conditions and line up the drone to capture beautiful images of the surroundings. You can also check out our drone photography guide for that.

DJI’s airframe has a revolutionary design being made from composite material which makes it sturdy and aerodynamically sound.

This airframe is also lighter than its predecessors (Phantom 2 and Phantom 1), and it was specifically built as to counter the buffeting effect when flying the drone against stronger winds. Moreover, the airframe can also keep vibrations to a minimum to make the drone smoother to control.

Additionally, the drone can achieve a maximum altitude of 6000 meters and can operate at temperatures between 0 and 40 degrees Celsius.

The Phantom 4 is equipped with four high-powered rotors, which are equipped with the coreless technology. This system prevents the engines from overheating, therefore eliminating the probability of the drone being damaged by heat. The quadrotors are protected by four fan guards, made from the same material as the drone’s airframe.

To help navigate the drone through all types of environments, the company has outfitted the DJI Phantom 4 with a GPS and GLONASS-guided navigation system.

Another unique feature that places this DJI Phantom drone in front of its competitors is the OSS (Obstacle Sensory Range) system.

Using the OSS system, the drone can navigate through the environment without being assisted by the user. However, the automated navigation system can function under certain conditions.

For example, the ambient light must have an intensity of 15 fluxes or more for the sensor to figure out its surroundings.

The OSS system has a range between 0.7 and 15 meters and also requires a clear pattern. For instance, the Phantom 4 can perform exemplary if flown over a beach but may have trouble avoiding obstacles if piloted inside a forest.

DJI has another surprise in store for its customers: The Tap to Fly system. With the mobile device use the function to fly the drone without using the remote control. Gently pinch the screen to create a flight path, or tap it to order the drone to move to a specific location.

DJI Phantom 4 has a 12.4 CMOS Sony Exmor imaging sensor and can take photos at a maximum resolution of 4000×3000. Other photographic capabilities include:

Phantom 4’s advanced imaging sensor is also capable of recording every step of your outdoor adventure. The drone’s CMOS sensor has five types of video recording modes (HD, FHD, 2.7K, 4K, and UDH) and can achieve a maximum video bit rate of 60 Mb per second.

All photos and videos are stored on an external MicroSD, with a maximum storage capacity of 64GB.

DJI Phantom 4 is mobile ready, and it is compatible with any devices running iOS 8.0+ or Android 4.1.2. The mobile application is called DJI GO, and it will allow the user to unlock the drone’s full potential.

Tap to Fly is one of the features that can be controlled through a mobile device, the other one being the live video feed mode.

The Phantom 4 remote control also has an HDMI port, which means that you will also be able to attach a pair of FPV glasses to enhance your piloting experience.

Phantom 4’s RC is not pretentious in design, sporting out only a couple of buttons. The main difference between Phantom’s RC and other is that DJI’s remote control has inscriptions under each button so that you will always know what to press to access a specific function.

The directional joysticks are plated with aluminum, which ensures their durability and anti-slipping properties.

Overall, the drone’s RC is easy to use, and, if you read the manual carefully, you won’t have any trouble controlling your drone. Another thing we like about this drone’s RC is its two customizable buttons which you can set to serve any function.

The RC also comes equipped with a smartphone/tablet holder which can accommodate any type of device, regardless of its size. To make it easier here’s a rundown of the drone’s controls and their functions:

As part of our testing section, we’ve graciously bypassed the indoor flying tests as we could not take advantage of the drone’s capabilities. So, after taking this bad boy outside, we started our tests by carefully installing the fan guards and the batteries.

Once finishing this operation, we’ve hit the power button to bring the drone to life. As we’ve expected, the Phantom 4 makes quite a racket when switched on, but given its sizes it’s understandable.

You can race it around at speeds of 20 meters per second and make it perform all sorts of aerial stunts. The main disadvantage of keeping sports mode on is that you are on your own, meaning that you’ll need to have some experience with a high-power drone to fly it around.

If you’re a beginner, we recommend that you stick with the Intelligent Flight mode, which you can turn on by binding a mobile device to your RC and downloading DJI Go from Google Play or Apple’s Store.

The OSS system we’ve spoken about earlier is indeed a marvel of technology. Provided that the light’s intensity is above a certain threshold (roughly 15 luxes which is the equivalent of a sunny summer day), the drone will not have any issues identifying and avoiding obstacles in its path.

However, there is one thing DJI did not mention about its obstacle detection system: the sensor only picks up things that are in front of the drone, which means that its sides and back are still vulnerable to crashes.

The drone performed marvelously when we flew it over cars and tree branches. Its intelligent sensor was able to map out without any issues the obstacles and stopped the UAV before crashing into them.

When the sensor senses that there is something in front of the drone, it will automatically engage the air brakes, putting the drone in auto-hover mode.

DJI Phantom 4 has multiple flight modes available such as Tap to Fly, Active Track, and Advanced. In Tap to Fly mode, you can instruct the drone to go anywhere you like just by tapping on your device’s screen.

Of course, you can also use this system to plan flight paths and to perform other actions.

Active Track is another proof that human ingenuity has no limits. So,  imagine that you want to take your dirt bike down a slippery slope.

Naturally, you would want to record your performance. When into Active Track, the drone will immediately switch on the camera and will start following you around.

Basically, the DJI Phantom 4 is a testament to the company’s strive to innovate the drone market. It’s light, easy to pilot, sports out many functions, and can adapt to literally any type of environment.

The DJI Phantom 4 is a professional drone that can satisfy the needs of pilots with experience. As a result, it has a high-quality camera and various tracking and location systems. Here is what you will find in the box:

To conclude, the DJI Phantom 4 is an exquisite large class UAV, which incorporates the latest developments regarding drone technology. Highly versatile and easy to use, the Phantom 4 is a great choice whether you’re a beginner or a professional.

The DJI Phantom 4 is the first drone on the market which uses an intelligent tracking system to map its surroundings.

Furthermore, thanks to its advanced tracking and navigational functions, Phantom 4 is considered the first independent drone, requiring little attention from the user.