The Goolsky FQ17W is a compact size drone that can fit into your palm or pocket, apart from being small, you can also fold the mini drone’s aerofoils and blades for safe transportation.

Despite its small size, the Goolsky FQ17W mini drone is rich with innovative features like live video streaming, a gravity induction mode, flip function, and an altitude hold function.

We would recommend the mini quadcopter to beginner hobbyists or those at the intermediary level. Our article has scrutinized the drone’s unique features, advantages, downsides, and useful guidelines to help you make an informed decision.

Some of the Goolsky mini drone’s notable features include an altitude hold function that lets you suspend the drone when shooting videos and photos. The drone supports the gravity sense control that allows you to operate the drone following the orientation of your smart mobile gadget.

This compact drone is foldable and so flexible that you can bend it and besides being palm-sized it becomes so small and portable that it provides a safer user experience by preventing the user from getting cut.

Another great feature that defines this drone is the FPV real-time transmission that lets you stream live videos captured by the drone, using your mobile phone.

Moreover, the mini-drone features 3D flips for 360-degree rolls, a headless mode that lets you fly the drone regardless of its alignment, and LED lights for a fun nighttime flight.

If you want to check out a similar drone, you can look at our DBPOWER UDI U842 review. 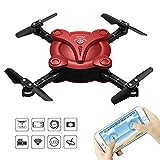 The mini drone comes with a black colored 2.4 GHz transmitter with different buttons that function synergistically in order to deliver a successful flight. However, you will need to buy three AAA batteries separately to power the transmitter.

The on/ off switch is located in the lower middle part of the remote. The led light located on top of this key lets you know when the remote controller is powered or when the drone and the transmitter are syncing.

The up/ down and right fly key located on the top left side of the remote, lets you change your drone’s flight direction. Below this button is a cross shaped key which serves several functions.

The mobile phone clip on the topmost side of the transmitter holds your smart phone, giving you the freedom to watch live videos captured by the drone while your hands remain engaged on the remote control.

Flying the drone is not a difficult task after mastering the functions of each key. Basically, the process entails assembling the drone, switching on the drone and transmitter, taking off, and landing.

To start off, we recommend that you assemble the quadcopter as per the user guide. This is crucial in order to avoid accidental crashes that can spoil the drone, exposing you to injury or damaging other people’s property.

After you assemble the quadcopter correctly, get into an open ground to make your first flight. Place the drone on the field and turn on the transmitter. The LED lights on the transmitter and the mini drone will blink when they have power.

With your remote control switched on, gently press the take off key to get your drone airborne. While it is airborne, you will realize that it is swaying to the left, right, front, or backward.

Use the trim keys to balance the drone into a stable hover. While in the air you can use the speed switch to regulate your drone’s flight speed, as well as the 3D flips to make 360-degree rolls. When you want to land press on the landing key to get the mini drone onto the ground.

Like most drones in the market, Goolsky FQ17W mini drone’s standard package comes with additional accessories to help you assemble the drone, replace parts that wear out, as well as troubleshoot problems that might arise while using the drone. Some of the accessories in the package include:

Goolsky FQ17W mini drone is an ideal option for beginners and those at the intermediary level of flying quadcopters.

We recommend it because it supports an FPV function for live video and photo streaming and you can suspend it on air while capturing the pictures.

Additionally, its remote control is easy to use, and it supports a headless mode function. These innovative features ensure a comfortable and safe flight.

However, the mini drone’s camera is not powerful enough, and beginners have to take some time to master its operation. What do you think about this mini drone? Leave us a comment below!