Check out our Holy Stone F180c review to learn more about this amazing and never before seen mini quadcopter drone. You could say that the sky is the only limit, but you can’t go to the skies without a great flying companion, and this is where the Holy Stone f180c mini kicks in.

The F180 series is, by far, Holy Stone’s best line of mid-range drones. They have everything a customer could ever dream of: great maneuverability, robustness, and a camera to record all those great moments. 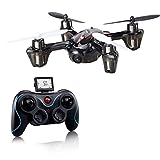 The Holy Stone F180c, also known by its full name of Holy Stone F180C Mini RC Quadcopter with Camera 2.4Ghz 6-Axis Gyro Bonus Battery and 8 Blades, is, without a doubt, one of the best mid-range mini quadcopters with a camera on the market.

This drone is equipped with four brushless engines, which have the coreless technology. Meaning that the engines won’t overheat after flying the drone for an extended period.

The whole ensemble is powered by a 3.7 350 mAh battery. That keeps the drone up and running for 6 to 8 minutes. If you keep the camera on all the time, then the batteries won’t hold for more than 8 minutes. Basically, the same thing applies if you perform a lot of 360-degree flips, or if you crank up the drone’s cruise speed.

As for the design, we can unarguably say that the F180c’s body is very similar to its predecessors, mainly the Holy Stone F181.

If the Holy Stone F181 model got the nickname of Chaser, then this drone should receive the name of Nomad, as the main protagonist of the Crysis franchise, since its body shares the same features as the character’s power armor.

Furthermore, the main Holy Stone F180c parts are the four propeller guards, which protect the blades and the motor assembly in case of impact. All in all, we can say that the drone’s body is sturdy, robust and quite slick.

Regarding A/V capabilities, we need to mention in our Holy Stone F180c review that this mini drone is rigged with a 2-megapixel CMOS imaging sensor. Which sports out a 6p lens and the Phase-Detection Auto-Focus technology.

As part of our Holy Stone F180c review, we’ve actually managed to grab some of these wondrous mini drones and to subject them to our usual stress tests. Like you’re accustomed to, the field test section will be divided into two subsections.

The first one will describe the drone’s remote control, which, by the way, is pretty nifty. But not much improvement since the F181 model got out. While in the second, we will tell you how the drone survived our improvised obstacle course.

The Holy Stone’s F180c mini drone with camera remote control is uncannily similar to F181’s remote control. After unboxing the thing, we were under the impression that we’ve actually ordered the wrong thing.

Sadly, we had the legit thing on our hands. So, the RC is divided into three parts. You have the upper part of the RC, which has the throttle limiter, on the left side, and the one-key 3D flip button on the right side.

Moving on to the rest of the RC, the middle part of the remote obviously contains two stick-like controllers, the power button, and the bright red LED power indicator.

Beneath the two stick-like controllers, you will see two additional cross-like buttons, similar to Nintendo’s gamepad buttons. Which are used to control the drone’s additional feature like a return home, night lights, camera mode, video mode, and in-flight trimming.

Overall, the controller is alright: it fits nicely in your hands, buttons and controller have an extra Anti-slipping layer, and we didn’t have any issues reaching the outer controls.

As for interference, there was none we could see, and we tried flying the drone both indoors and outdoors. Furthermore, no loss of signal occurred when we tried to fly several drones at the same time.

How does the F180c model compare to the competition? Well, from what we can gather from our flight test, it is able to stand out in front of any mid-range mini drone out there.

It may not be as proficient as the DJI Phantom 3 or as outstanding like the Parrot Bebop drone, but the F180c can deliver.

As part of our Holy Stone F180c review, we’ve managed to test the drone both indoors, in a large room, as well as outdoors.

Without any shadow of a doubt, we have to say that the drone aced both tests. After setting it up for the first indoor run, we switched the drone on and tested its take-off feature.

The F180c took-off from the table smoothly, without any deviation from its trajectory. In just a couple of seconds, the drone was buzzing around the room, making flips, evasions and, basically, everything we instructed it to do.

The throttle limiter is quite handy, as it helped the drone navigate around tight corners without a problem. Hovering around objects such as lamps or chairs was a breeze, thanks to the drone’s highly responsive remote control.

Furthermore, after switching the throttle to full, we were able to squeeze out about 5 meters per seconds, which is pretty fast for a mini drone.

Of course, for the purpose of our tests, and in the name of science, we even crashed the drone to see how it reacts.

Well, the propeller guards managed to get the job done, making sure the drone’s motors and blades remain intact.

As far as outdoor flying goes, the F180c model performed marvelously. It was a bit of a windy day, but the drone was able to compensate each and every time, without losing altitude or speed. Tree branches were not a problem for this drone, partly because of its 6-axis gyro system.

Now, when it comes to A/V capabilities, the drone manages to surprise us. We don’t want to anathemize each and every drone out there equipped with image sensor below 8 MPs, but we did have nasty surprises.

But, F180c’s imaging sensor didn’t let us down. The pictures were crisp, clear, sharp, even though it doesn’t have an automatic brightness sensor.

As for the drone’s recording capability, we’ve managed to squeeze out 30 frames per second at 1280 x 720 pixels, which is pretty awesome for a mini drone’s camera.

As far as we’re concerned, we are dealing with a mini quadcopter drone made for beginners, but it has all it needs to appease the pros.

As part of our Holy Stone F180c review, we’ve seen a couple of things that we don’t like about this drone. Fortunately, in this case, the pros outweigh the cons.

Overall, the drone is very responsive, fun to fly around the house and in your backyard, and thanks to the extra battery, you can enjoy the drone even more.

As a general advice, be careful when installing the battery. The power cable has the odd habit of falling off during flight and mingling with the blades. Enjoy your Holy Stone F180c drone, and don’t forget to tell us about your flying experience!