If you’re wondering what’s the most fun drone to fly around, then we invite you to check out our Quadpro Nc5 nano quadcopter review.

Combining some of the latest techs in drone piloting, such as the adjustable flight sensitivity sensor and the 6-Axis gyro system for stable flights, this nano drone can become the delight of children and adults alike.

Also, another great thing about this drone is that it comes in a nifty, case display-like box, which means that once you’re done playing with the quad, you can easily pack it and store it nearly anywhere. In fact, if not for its labeling, anyone would confuse it with a knick-knack. 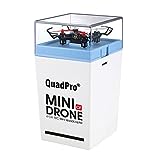 The drone’s body is made out of durable plastic, so you can be sure that it won’t come apart after the first crash.

Also, the Quadpro Nc5 nano quadcopter 360 degree flip mini drone (black/ red) is equipped with four brushless engines, which are more than capable of making the drone flight through any type of environment.

Still, unlike the Holy Stone or the Syma Cheerwing X series which sport out the coreless motor tech, the Nc5 only uses basic brushless engines.

But, given the fact that it can stay up in the air for about 5 minutes, the drone doesn’t really need the coreless tech.

The Quadpro Nc5 nano quadcopter flips mini drone also comes equipped with two bright LED lights, which means that you can fly this drone even during the night although we strongly advise you not to, as we will cover this aspect later on.

To complete our Quadpro Nc5 Nano Quadcopter Review, we have created an overview of the drone. Check out the pros and cons of this quadcopter to decide if the product is right for you.

Naturally, as part of our Quadpro Nc5 Nano quadcopter review, we’ve to manage to try out this bad boy.

Unfortunately, we have to say from the very beginning, that we only got around to test the drone outside for a couple of minutes, because, the mini drone does not respond well to soft winds or to tree branches.

However, as far as indoor testing is concerned, this mini drone really knows its business. So, without further ado, let’s get around to remote control description and flying impressions.

The Nc5 Nano Quadcopter came in a plastic container, with the drone secured on top behind a transparent case. After opening the box, we’ve managed to find out the drone’s RC at the bottom of the container.

We first thought out that this was some kind of a joke, since the drone’s RC was so small, that it was more suitable for a child than an adult. So, basically, here’s our first obstacle: believe it or not, the Nc5’s RC is way too small to fit into your hands.

Still, the RC seemed and felt pretty functional, sporting out only a couple of buttons. On the top side of the RC, you can find the adjustable flight sensor, with two types of options: push it once, and the drone will become less sensitive to controls (best option for a beginner).

If you push the button a second time, the drone will have switched into pro mode (more sensitive to control).

Moving on, in the middle part of the RC, you’ll see two stick-like controls, which, surprisingly enough are coated with some sort of anti-slipping material to prevent your thumbs from slipping off during flight.

Although they aren’t spring-loaded, the controls are very responsive to touch, making each flight seem like a piece of cake.

As usual, the left button is for up/down/left/right, while the one on the right is mostly for left/right strafing. There are three additional buttons on the remote, the power switch, located beneath the LED indicator, and two buttons used for flight trimming.

Overall, the Quad’s RC is responsive, functional and has a decent design, even though we’ve had a couple of issues with actually working the remote control.

As we’ve mentioned above, as part of our Quadpro Nc5 nano quadcopter review, we were able to test out this drone.

Sadly enough, the drone doesn’t work that great if you take it outside, as any gust of wind, will make it crash to the ground. Furthermore, it doesn’t fare well in the proximity of obstacles, such as tree branches or poles.

But, when it comes to indoor flying, this nano drone knows how to do its job. After hitting the power buttons and pushing the left controller, the drone took off without a problem.

To see how it handles indoors, we’ve tried to fly it as close as we could to various objects such as lamps, desks, and even through the bathtub.

Surprisingly enough, it was able to navigate without any major issue. However, since the prop guard is made out of cheap plastic, it won’t handle crashes that well. But the drone’s body is quite tough, so you can crash it all you want.

As far as stunts are concerned, the Nc5 drone performs above and beyond the call of duty. We were able to do back flips, frontal flips, 360-degree flips, and everything in between.

The drone responded quite well to air stunts, and we were happy to see a drone that could navigate so well in close quarters.

All in all, this Quadpro quadcopter is easy to fly, and not to mention quite fun for the whole family. Still, a word of advice: when taking off, be sure to push the stick very slowly, as the drone doesn’t respond that well to sudden commands.

During our Quadpro Nc5 nano quadcopter review, we’ve noticed that this drone has its share of ups and downs.

The Quadpro Nc5 is an ideal drone for a beginner as it doesn’t have any professional features. We actually liked how the drone handles indoors.

Still one can be reluctant to buy a drone that does its job inside the house. Overall, the drone was responsive and fun to fly. If you have anything to add about the Nc5 nano drone, feel free to use our included comment section.