Get ready to own the skies with the Sky Viper video drone, the ultimate experience when it comes to aerial videography.

Combining the latest trends in aerial stabilization and imaging sensors, the Sky Viper video drone will literally sweep you off your feet with its crisp video and photo capabilities.

The Sky Viper Video drone is probably one of the most versatile UAVs we have seen on the market in the last couple of months.

Instead of focusing on making a cheap and fun to fly drone, the manufacturer decided to go the extra mile in order to create a UAV that can satisfy even the most capricious customers.

Unlike other mini drones, the Sky Viper video drone is both easy to use and durable, thanks to its Duraflex airframe. Bear with us a little longer and we will show what this drone is truly capable of. 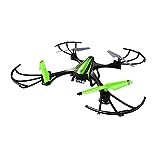 The Sky Viper Video drone can take off to the sky in a matter of moments, thanks to its four brushless engines that sport out the coreless technology.

Also, we have to say that although the drone’s body is well-protected thanks to its Duraflex body, the manufacturer saw fit to include four extra fan guards for extra protection during those close fly-bys.

Moreover, the drone is powered by a 650 mAh 3.7 Lithium-Polymer rechargeable battery, which means that the sky Viper video drone flight time is estimated at around 4 to 5 minutes, depending on how much you’ll want to keep that camera switched on.

As for its video and photo capabilities, Sky Viper’s eye in the sky can capture crisp 720p quality photos and footage. Furthermore, the drone is also equipped with a one-touch Panoramic mode button.

Once this function is activated, the drone will position itself automatically in order to capture crystal-clear panorama mode pictures.

With its 4GB microSD card included in the kit, you will be able to record up to 20 minutes of video footage at the same HD quality.

Moreover, if you’re really into to this whole aerial photography gig, you can swap the drone’s 4GB microSD card with a 32GB memory card.

Other features and specs:

As always, we have dedicated a few hours in order to test out this marvel of technology. Now, on a personal note, we have to admit that the Sky Viper Video Drone (V950HD) High Definition Vehicle performed admirably, being able to ace nearly every test we could think of, including our death-defying indoor course.

After unpacking the thingamabob, we found ourselves in front of a cleverly-designed remote control, that looked rather cool. We’ve liked the fine neon-greed touches and the product’s logo smack in the middle of the remote control.

Furthermore, the remote’s overall design gave us the distinct feeling that we are actually dealing with a professional drone, rather than a toy one.

Now, Sky Viper’s RC is dived into two parts: the upper part, which contains the wireless transmission antenna, the stunts button on the left, and the camera switch on the right.

The middle part of the remote control contains two stick-like controllers, which are coated with a special anti-slipping material. Under the left controller, which is used for up/down/left/right, you have two rectangular-shaped buttons which are used for trimming.

Now, under the left stick-like button, you will find some additional buttons used mainly for flight trimming. All in all, we need to admit that we were quite impressed by the Sky Viper’s remote control, which is both easy to use and intuitive.

The controller fits your palms like a glove, and you won’t have any issues reaching the farthest buttons.

And now we come to the truly fun part of our Sky Viper video drone review: the infamous flight tests. Seeing that the manufacturer declared that the UAV could be flown both indoors and outdoors, we’ve wanted actually to see with our own eyes just how well it can handle an indoor setting.

After hitting the on button on the remote control, the drone came to life without any issues. Personally, we have to admit that we were kind of surprised of how ninja-silent this drone is, considering the Sky Viper video drone size.

Take off went pretty well, but we did observe a slight deviation from its course. However, in just a matter of seconds, the drone managed to overcome this obstacle and went buzzing through the room. As for its maneuvering capabilities, the Sky Viper didn’t have any issues figuring out how to overcome everything we threw at it.

It did have a slight problem maneuvering in tight spots, like the space under the kitchen’s table, but we’ve managed to compensate.

The auto-hovering feature coupled with the 6-axis gyro stabilization system worked like a charmed, and not once did the drone stall or crash. As far as we’re concerned, the Sky Viper video drone performed admirably indoors.

Naturally, the next step of testing the drone had to be the outdoor course. For this purpose, we chose a day which had everything: a little bit of the wind, some rain, and even a clear sky. Flying the door outside, was for us, an “unleash the beast” moment.

If you thought that the Sky Viper works well in an indoor setting, just wait until you take it outside. Low branches, high branches, rooftops, soft winds – the drone is able to subdue all of them, without even flinching.

Now, as far as the Sky Viper Video drone camera is concerned, we have to say that this is probably the first time we’ve seen the “what you see is what you get” principle in action. The camera can indeed capture 720p footage, and produce crystal-clear 8MP pictures.

But the camera’s most outstanding feature is Panorama mode function. Upon hitting that little green button, the drone stops in mid flight, positioning itself as to allow you to take the perfect picture. You can also use this feature in order to get awesome close-up photos.

All the pics and movies went directly to the 4GB microSD card, which can, in turn, be taken out of the drone and placed inside the computer. As a word of advice, you won’t need to tweak footage or pictures any further, because the SteamPro software knows how photo/video post-processing works.

Furthermore, another thing we’ve enjoyed about this drone is the fact that you can actually detach the camera if you want to fly the drone without any aerial photography support. By doing this, you can actually extend the drone’s flight time by 2 or 3 minutes.

All in all, we have to say the Sky Viper video drone is an outstanding piece of equipment, suitable for beginners and intermediate users alike.

Concerning the Sky Viper video drone design, we have to appreciate the fact that the manufacturer spent that extra dollar in order to create something that it’s both smooth-looking and tough.

As far as the Sky Viper drone pricing is concerned, you can get this amazing UAV for only $80, transportation fees included.

From time to time, you may have some problems with your propellers and with the securing screws, but that’s not much of an issue because you can find many Sky Viper video drone parts in any hobby shop.

The last item on the menu is the Sky Viper video drone manual, which, in our opinion, was the most helpful set of instruction we’ve ever seen.

All in all, this drone is easy to assemble, fun to fly around your house or backyard, and it’s recommended for both beginners and intermediate users.